Well that's not you

"Well that's not you"   and  "You were never like that before"
seems to be what I am hearing from my family lately.    Freal them.

Hallowe'en is normally the time of year for me.  Between being Pagan, and just loving the holiday in general, I usually start making a fuss about it back in July.
But this year, I'm not feeling it.

I'm more excited about the movie The Rum Diary coming out this weekend then I am anything else. 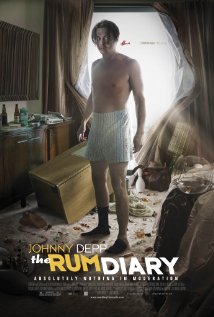 Anyone who does know me, knows I've always been interested in the works of both Hunter S. Thompson and Johnny Depp.

You also know that I believe greatly in signs and omens.  The Rum Diary comes at me when I'm sort of on the edge of what I should be doing next as far as my writing goes.  It's also about how Hunter S. Thompson became Hunter S. Thompson.

Taking that as a sign.
Posted by Domestic and Damned at 8:18 AM