Fear Down Man, Check out the Curves 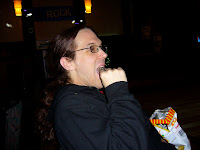 Okay, I know I wasn't going to post anything till the New Year, but... my buddy Matt and his friends helped me get over one of my fears.


GET YOUR MINDS OUT OF THE GUTTER!!!! 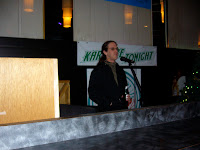 Bad Spudguns bad bad Spudguns.   Matt's a musician friend of mine, and he's very bravely helping me work on some music for my vampire/zombie film, and I knew I'd need to sing right... right.  So practicing singing was in order.  So we went to the bar for karaoke.

For those of you who have been reading me for awhile, you know I have not stepped foot in a bar since 2004 cause of my fear of bumping into my ex the dj/musician.  You would also know that I said this was a silly silly fear I needed to get over and wanted to get through this fear in 2010.   Well I did... with 24 hours to spare how's that for timing. 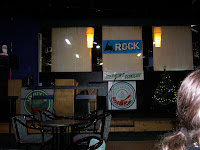 We went to Newfie's Pub.

I wore make-up and .... wait for it.... a bra! Yes, feel special.  But I wore dirty jeans and my MotorCityMachine Guns! tee just for safety.  Like armor cause it's a dirty icky bar where people have a tendency to use you as a coaster for their beers or a napkin for that matter.  Won't even talk about the state of the ladie's room. 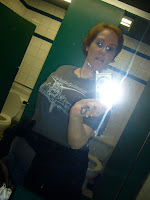 I spent way way way more then I had planned on, and the guys were even buying so .... yeah it was interesting to say the lest.

We got there, first off let me say that we were the only non-natives in the place other then the staff and after the first ten minutes it looked like a fight was happening across the dance floor and Matt there was all "We're going to get killed"  And anyone who's been following the news in Thunder Bay knows about the dead dude from Newfie's... moving on...  We order our drinks and the boys all order beer, then there's me, I ordered Screech and the bartender looks at me with an eyebrow and dares to ask if I want it mixed.  "Straight"
she asks me if I'm sure then says "Brave girl hope you know what you're getting into"  and the three boys had the same look of disgust on their faces too as I downed it.

Then came the singing... after I RKO'ed the dj.  Well, more like ran up to the dj booth the second he was in the building before he even had his coat off.  Damn it! I was having karaoke withdrawls and wanted to be first in line. Yes, my Spudguns, I fell off the wagon.  6 years and now... now... the boys have been forewarned that we will be hitting Newfie's Pub again very very very soon! 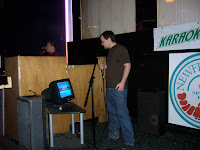 From there... may I just point out that the bar smelled like piss as did the two dudes sitting at the table next to us, and the cab ride home smelled of vomit.  Can't get any realer then that folks.
Where was I?.... right Copacabana... What I learned was Roadhouse Blues = good   Friends in Low Places = bad. 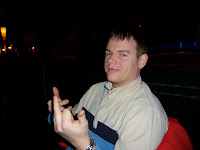 Steve wouldn't sing.  Nope none.  But he did get up and dance with some psycho hooker.

Oh and Matt... I have to find you a new catch phrase cause if I have to hear "No Way"  or "check out the curves"  again I will RKO you.  Which I think brings me to the old gross guy who asked me where the men's room was.  Um... come on man! Seriously? Do I look that bad?  Well, I suppose next to the Queen that was dancing beside us all night... I have to admit Queen was more feminine then me and my tits are real.  Which is why every time the boys went up to the bar for drinks they did NOT have to stand in line but yet every time I went up for a drink I ended up standing there for ten frealing minutes before the female bartender even bothered to notice me. 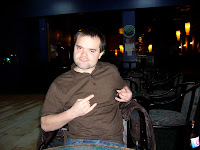 Oh and Colin you're on notice... next time we're signing you up for Mandy  I get War Pigs


Posted by Domestic and Damned at 3:07 AM