So here's me flipping through the new releases on the Shaw Video On Demand  this afternoon at mother's and I spot this new horror film called  Dylan Dog Dead of Night.   The artwork looked a bit on the indie horror side and reminded me of a movie I'd seen few years back called Demon Hunter so I thought I'd check out the list of who's in it.

I had to rent it.  So I'm watching this thinking, "Kurt Angle in a vampire movie?"  Mother was even watching this one as much as she would ever watch a vampire movie because it was more of a cop show.
Whole time I'm thinking this feels much like one of those classic Columbo  or Night Stalker  made for tv movies from thirty years ago.  And there was TNA's Kurt Angle, as the character Wolfgang, the main for the werewolf side of things.  Dude!
I had no idea until the end of the credits that this is based on a comic.  But it was indeed funny, both mother and I were laughing through it. 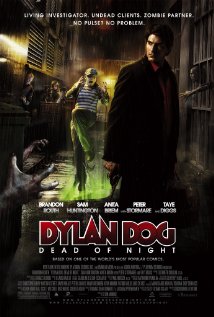 Posted by Domestic and Damned at 7:06 PM