Yeah, it happened.  We got another round of frealing snow last night.  Damn it Janet!
It's been summer weather here for the last two weeks and suddenly this morning we're covered in the fluffy. 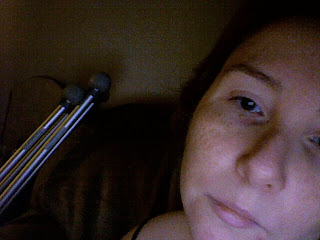 I wanted to get a shot of the snow but stuck on the sofa and unable to get the webcam in the right spot to see out the window.  So instead, here's me and my crutches sitting on mother's sofa.
It's early here... well okay not as early as I would be up at home, but I am going batty here.  I don't know how people can live with their parents after a certain age?
I have another week before they start me on therapy and I know that's going to be hell.  I don't even want to think about the fact I will then have to go back in for a second surgery to remove the wires.
Honestly, that almost seems backassed to me.  Starting me on therapy then going to have the wires removed.  Shouldn't they open my knee up again first, let my flesh heal then start me in physio?
Anyways, I still have no idea how long before I'm doing stairs enough to get home?
Today marks 5 weeks since I broke my knee.
Posted by Domestic and Damned at 8:20 AM