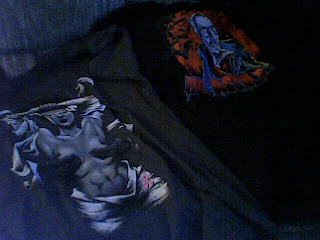 Finally!  My Fright Rags tees came in!!!   Dude, I have to remember for next time that it takes about a month after they ship them for stuff to get to Canada.

As you can see, I got a few vampire related designs... there's a shocker for ya!

The most important of which is the limited edition  "We Belong Alive"  shirt that was helping to fight breast cancer.  And in fact, the whole reason I ordered the shirts.  Okay not a vampire but a Bride of Frankenstein... close enough.

I have to add, that the "Dr. Acula"  is a bit on the uber large side, as it was a clearance shirt - scored for $10- and the only sizes they had left at that time were 2xlarge.   So it comes to my knees and looks like a mini dress.  I have a feeling it might be paired with knee boots and a trenchcoat come spring.

Third design is the Fright Night "Welcome to Fright Night For Real"  shirt.   -and no, I still have not found my original Fright Night shirt {You're so Cool Brewster!}  that I had in 2007 ... I still think an ex boyfriend stole it... 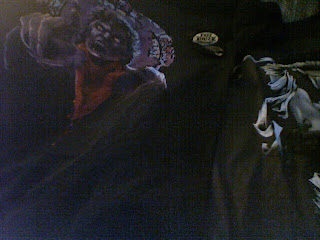 And speaking of Fright Night... my copy of the remake was sent over via Uncle who picked up my tees after standing in line at the post office for me for a half hour.   I find it also ironic that my Uncle is the one who got me hooked on vampire movies to begin with when I was still in diapers.  {he put me in my playpen when babysitting in front of the tv while the old black and white Bela Lugosi version of Dracula was on, I screamed when it ended  and I've been obsessed ever since} 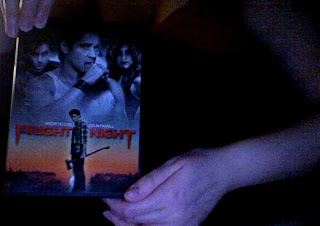 And you're thinking, how can anyone be this excited over a few shirts and a DVD... cause dude! hello vampires!!!  And I'm like totally living up my dorkdom.
Posted by Domestic and Damned at 4:49 PM