The show opened up with Eric Bishoff, who got a round of "you suck" from the crowd. And a round of "we don't care".  He was introducing his team for the ppv this weekend.  Then young Bishoff came out to introduce his team.

Cut to- Mr. Anderson vs Gunner.   This was the first of a best of three for the team members. Gunner was given the win after Anderson was DQ.

Cut to- Eric Young getting ready in the locker room for his wedding.  And Abyss's "brother" came in to talk to him.

Cut to- the MotorCityMachine Guns!  see the last paragraph

Cut to -Daniels vs  Austin Aries.   this was the second of the best of three for the Lockdown teams for a man advantage.  The crowd was cheering for Aries throughout and gave the bonus chant of "this is wrestling"   see the match of the night at the bottom of the paragraph

Cut to-Hardy coming down to the ring to talk about his match this weekend against Kurt Angle.

Cut to- EY in the locker room again getting ready for the wedding, with a few of the KnockOuts trying to seduce him.

Cut to- The wedding of EY and ODB...um yeah er...everyone in the ring got naked.

Cut to- backstage where Team Bishoff are yelling at each other.

Cut to-  Roode and his back up replying to Storm's earlier comments.

Cut to- Bully Ray vs A.J. Styles. This is the third match in the best of three. Bully Ray got the win with a cheap shot.  This gives Eric Bishoff's team the advantage at the ppv. But Hogan came out to tell them that the odds just went up. It's now going to be 5 men per team.

Cut to- Another promo of Roode vs Storm for the ppv this weekend.

Cut to- KnockOut tag match.Velvet Sky and Mickie James got the win.

Cut to - James Storm came to the ring to talk about the ppv this weekend. Roode then came out to give his point of view as well.  They talked about their times as tag champs, and the tournament last summer.

The Match of the Night: 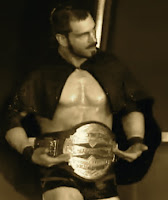 They started this match with a side collar tie up that Aries turned into an arm-bar then smoothly turned it into a side head lock.
Daniels got out of the move by pushing on the back of Aries's knee. While he had him down on the mat, while hanging on tight to a wrist lock.
Aries used a few quick flips to get out of the move. He then got Daniels into another side headlock.
Daniels managed to get control for a moment pushing Aries off the ropes, but Aries sidestepped him. Aries then managed to get him off kilter with a clap behind the ears.
Daniels pushed Aries into the corner giving him a round of shoulder blocks before bringing him back to the center of the ring with a simple punch.  Aries then with a deep arm drag, but it was countered by Daniels with a head scissors on the mat.  Aries did his trademark handstand to get out of it followed by a short dropkick.
Daniels then went barreling into the corner, only to get an elbow full of turnbuckle, as Aries jumped over the top rope to the apron.  He then slingshot himself back in giving a well placed elbow to the jaw of Daniels.
Daniels fought back by whipping Aries into the far corner but got another elbow for his trouble. Aries then went outside the ropes for a high risk move but Daniels jiggled the ropes causing Aries to fall onto the turnbuckle. Daniels then used an open handed palm thrust knocking Aries out to the floor for a few seconds.
Getting back into the ring, Aries was on the mat with Daniels stomping on him before sending him shooting into the far corner. Aries was on the mat once again with Daniels over him stomping.
Daniels then used a suplex before trying for a cover but only got a one count.  He then got Aries in a form of shoulder noose -backbreaker combo.
Aries used a series of knees to the side of the skull to get out of the hold. Daniels then shoved Aries out to the floor and went for his sitting moonsault.  He missed.   Aries climbed back into the ring and landed a beauty of a suicide dive straight to the chest of Daniels forcing him back hard into the gates.
Aries then in control, began to run Daniels face first into the turnbuckles before giving him a few elbows to the back of the neck, a shoulder block and a roll over from outside. Aries followed up with a discus elbow. This opened up for Aries to go off the ropes with another flying back-eblow.
Aries went for the cover but Daniels kicked out.
Daniels pushed Aries into the far corner, but Aries managed to get a slideover and a roll up but still only a near fall.  Both men then went for roll ups both using the tights and both getting a warning from the ref.
Daniels then with a hard forearm to the back of the neck of Aries knocking him down for a moment. This was followed by a hard side slam as Daniels was getting ready for his trademark Best Moonsault Ever, only he missed.  Aries had rolled into the corner and managed to get to his feet. He landed a double kick to Daniels knocking him down on the mat.
Austin Aries then with a double missile dropkick, followed by a running drop kick in the corner before using his brainbuster for the win. 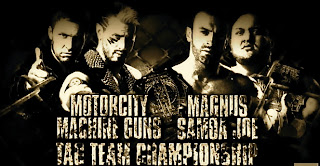 And once again, my "main event"  The MotorCityMachine Guns!...Alex Shelley, after making a few comments about the tag team of Crimson and Matt Morgan; damn I missed that sarcasm, announced that they will be taking on the team of Samoa Joe and Magnus this weekend at the Lockdown ppv. 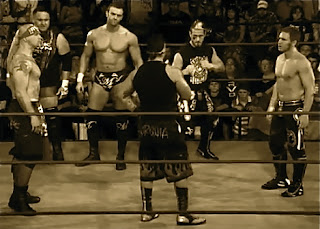 Joe and Magnus then came to the ring to answer the challenge. Magnus made a comment about how Sabin managed to come back from his injury which for some would have been career ending. They were about to get into things with them when Mexican-America came down to the ring. Both members of Mexican-America were made fast work of.

I have to say, I can not wait for the pay-per-view this weekend.
I am not one for cage matches at all, and I've never been shy to express that, but I am very much looking forward to seeing this tag match.

So what do I think will happen at the ppv?
I am going on record saying that Team Garrett Bishoff will get the upper hand,  that Angle will win his match, and that the MMG will win the tag belts.

Posted by Domestic and Damned at 5:38 PM