Impact.  Wrestling that Matters.
Humm.  You know, this could have been a fabulous show this week.  It had so much promise.

But then, it started off the way it has in the past, the way all the companies seem to do every so often when they think that they are reinventing themselves and always fall flat.
And yeah, I switched to the "new" logo for this...

Opening scene - The entire locker room standing around the ring, waiting for Hogan who is now the new official on air GM.
Cut to - Angle and Hardy in a match, where upon of course Hardy won. But it was by the fact Angle took a count out.  But Hogan was waiting backstage for Angle, as he walked right into the set up for Lockdown... Angle vs Hardy in a steel cage.
Cut to- Flair on the phone to Bishoff.
Cut to- Bully Ray checking his phone. He then went to the ring to call out Austin Aries. Aries gave him a what-for; until he got massively powerbombed.  But Aries looked great in the grey.
Cut to- Abyss... er Abyss's brother looking for him in the catering area.
Cut to - A.J. Styles in the back area also looking fabulous in grey, talking about who he thinks will win at Lockdown.  James Storm then came over to him and asked him to be in a match later in the show.
Cut to- An all former women's champ challenge.  Velvet Sky won becoming the new number one contender

Cut to- The locker room with Mr. Anderson talking about his thoughts on Lockdown. In walks Roode and his back up.
Cut to- Footage from the Country Music Awards where James Storm and Hardy were guests.
Cut to - Eric Young's geek fest... er bachelor party.
Cut to - James Storm vs A.J. Styles.  James Storm won with a superkick from nowhere as Styles was doing a springboard off the top ropes.
Cut to- Backstage with Hogan and Sting
Cut to - Backstage with James Storm's guests. Roode stepped in to make a few comments.
Cut to- MotorCityMachine Guns!  {see the paragraph at the end}
Cut to-Backstage, Flair and Bishoff
Cut to- Hogan calling out Eric Bishoff
Cut to- A promo of James Storms leading up to Lockdown
Cut to- Anderson vs Roode. Robert Roode got the win with a beer bottle to the back of Anderson's skull. But the decision got reversed giving the win to Anderson.


The Match of the Night: 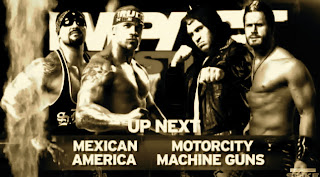 We start the match with a review of the match from a year ago that caused the injury to Chris Sabin's right knee. The crowd was chanting a very deserved 'welcome back' as the match got underway.
It got started with a smack to the face of Alex Shelley who returned the favour before driving Anarchia {been a long while forgive my spelling} then proceeded to lay in a few high knees to the chest of Anarchia. Shelley got him down on the mat in the corner, kicking him a few times before doing something he's known for; spitting and snotting on his opponent. Shelley picked him up by the ears and tagged in his partner Chris Sabin.
Jumping into the ring, Sabin showed that he's as good as ever as he landed perfectly like a cat giving a double axehandle before working on the arm of Anarchia.
Hernandez tagged in a few seconds later just in time to walk right into a mule kick by Sabin. And during this I must add, the crowd was chanting for Chris Sabin. Sabin then used his quickness to apply a octopus style armbar before sliding down the back of Hernandez. He then landed a few chops across the neck and throat of Hernandez. Sabin then went off the ropes rolling through and ducking from a clothesline before delivering a bulldog in the middle of the ring.  Sabin went for a cover by only got a near fall. 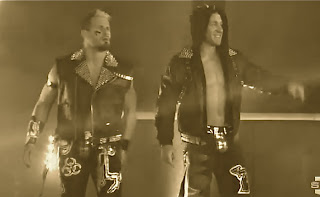 Alex Shelley then tagged in and they used a double team fly-by-night on Hernandez in the far corner before doing their trademark running stepladder. Sabin slid out of the ring to the joy of the crowd while Shelley went for a side Slice Bread but missed. Hernandez then was with a running shoulder block on Shelley sending him flying across the ring hard.
Anarchia tagged in, and sent his own partner across the ring with an Irish Whip square into Shelley in the far corner before jumping at him himself.  Shelley managed to move out of the way, and Anarchia went face first into the top turnbuckle.
Shelley then used a running enzuigiri then to knock down Hernandez in the middle of the ring. Sabin then tagged in, giving full steam to a short arm clothesline on Anarchia before kicking Hernandez off the ring apron. Sabin then used a combo corkscrew elbow on Anarchia in the corner with his trademark hesitation drop kick.
He was then about to lay on his CradleShock, but Hernandez saved his partner and managed to get Sabin into position for a BorderToss.  Shelley who crawled up onto the apron, snagged the legs of Sabin saving him. Shelley pulled down the ropes, just as Hernandez was charging at them, causing Hernandez to fall out of the ring.
Both Guns! went for a Stereo Kick to Anarchia in the corner, just before Sabin did a beauty of a Suicide Dive out into the pit hitting him flush in the chest.  Shelley then off the top ropes for a double team move, allowing for Sabin to get the cover for the win. 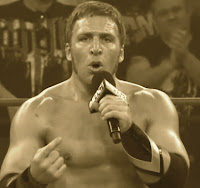 If you're new to my stuff, the deal is that the MMG get the "main event"  on my blog.  And I felt this needed to be the match of the night.
I had asked a few questions the other day, {Shall We Do a Happy Dance} And it seems that most of my questions were answered.
For those who don't feel like flipping through my blog and I don't blame you cause there's alot to shuffle through; my questions were Does this mean they will be the number one contenders for the tag team titles against Samoa Joe and Magnus?  Will they take any kind of revenge on Mexican-America? Will they have the same theme music? What will their tees look like, will they be grey? Will Chris Sabin have his trademark long sideburns?  So to answer my questions, Yes, Mr. Sabin did have his trademark long sideburns with a wicked hair cut, yes they did have the same theme music, they did not have t-shirts on when they came to the ring, and yes they got some revenge on Mexican-America and YES, they are going to be going for that #1 contender's spot against Samoa Joe and Magnus.
And, even though they had new pants, they had red in them... I'm all smiles there. 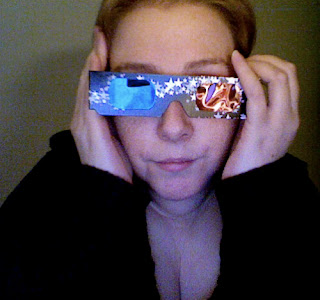 Posted by Domestic and Damned at 5:02 PM