Morning after the ppv with coffee art

WHAT PART OF STAY SAFE DID YOU NOT UNDERSTAND????  Mr. Styles, Mr. Daniels.  I can only guess that you did not read my post the other day.

Picture it, your heroine and heroin sitting here yesterday, waiting for the ppv to start, bored going slightly insane from the sounds of gospel music from the church down the street; when I started to doodle.   I don't draw as much as I used to, but I found myself thinking about the ppv of course.  So I decided to try my hand at drawing Austin Aries.
Killed time till the ppv started. Did I mention I no longer seem to have any sort of a life?  {It's a bit on the blurry side cause of the damned webcam on this pc}
Anyways... 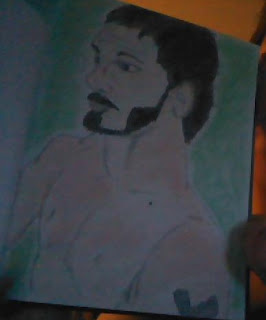 The ppv... My money was on Sonjay Dutt that is until he injured himself middle of the Ultimate X match, then I had to put my money - er okay cheesecake cause I'm broker then broke- on Zema Ion.  Yeah, I know we're thinking the same thing here... but Zema Ion had been in an Ultimate X before so he knew what kind of heights - total puns intended- he'd have to go through to win. And he did.  For now.
The X-Division is for gods of wrestling... okay in my world it is. But I'm bias.

Come to think of it, it was the Ultimate X match that Zema Ion was in where Chris Sabin got injured last month... this dude is cursed. Ion, I mean.  Let's get the belt off him and on to someone who can really handle holding it. I'd like to see Styles come back into the X-Division for awhile and take that title away from Ion.

The last man standing match between A.J. Styles and Daniels.  Brutal to say the lest.  There were a few times when I was so caught up in the match that my "holy Anne Rice novels Batman"  wide-eyed innocent self responded to things.  Like the Styles Clash through the table, and this one point when Styles went flying off the ramp-stage area over the announce booth into the crowd.  How do family members of wrestlers handle watching them do matches like that?
Dude, if that was my husband/brother/uncle/cousin  I would be having a heart attack unable to watch.

Samoa Joe vs Kurt Angle gave great submission.   Does that sound dirty enough to have been something I've uttered?  I mean come on, you knew from the second this match was announced that it was going to be the start of something sweet.  Here is a feud that could never get old simply because it's got roots.  Both men are equally able to score big time over each other, and do it cleanly.

And the main event.  And it truly was a main event.  Austin Aries vs Robert Roode.  Oh my god man!  Aries... that's all I have to say on this one.  Aries.
I know, I should be building my entire post this morning around this match and normally I would. But, I'm seriously thinking this is only the start of the next big feud.  Lest I hope there are second helpings of this dish.
There were so many near falls, so many moments when it looked like Roode was going to get the win but Aries kept going.  At one point in the match, and this was like a 40minute match people; one point when it looked like Austin Aries was right out of it and simply got his shoulder up without even realizing what he'd done.  He's that damned good.  You all expected me to make one of my typical comments like he's that damned yummy but I'm trying to behave. Yes you're right, me behave why start now.

Posted by Domestic and Damned at 11:39 AM