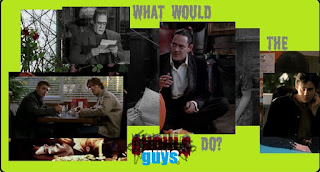 It's time once again for another installment of my What Would The Ghouls Do?  Only, this time, I decided to flip the switch on it. We ghouls shouldn't have all the fun...right?

Situation: I thought I was catering to one group of people, but that does not seem to be the case anymore. How can I pin down my real target audience?

plot: The guys go to Pennsylvania, to solve what they think is a "straight forward black and white case, but end up at an Octoberfest themed village, chasing down what ends up being a shapeshifter.

Quotes: "Big Pretzel" - Dean when arriving at the Octoberfest

"I'm a maverick, a rebel with a badge. One thing I don't do is play by the rules." -Dean trying to pick up the bartender.

"We have a lot of experience with strange." -Dean questioning a witness.

"So what do you think? Goth psycho vampire wannabe right?" -Dean to Sam after talking to witness.

"Definitely not our case." -Sam to Dean before learning of the second murder.

"Do whatever you've got to do. I'm going back to the room and get some sleep." -Sam to Dean

"Not weird enough." -Dean to bartender while talking about case.

"A werewolf? You're sure?" -Sam after learning about the second murder.

"First a Dracula, now a full on movie time wolfman. What's going on in this town?" - Dean to Sam as they enter the police morgue.

"This case just got weird enough for our department." -Dean to a witness.

"You're good here with the Mummy and the crazy?" -Dean to Sam as they investigate the third murder.

"But I have a coupon."  -the villain of the week to a delivery guy

"Oh in the nick of time. Guy was about to Frankenstein me." -Dean to Sam as he's being rescued.

Favourite Scene:  When the villain, dressed as Dracula answers the door and the pizza delivery guy is there, and he starts asking if there is any garlic on it.

Quotes Used: "So what do you think? Goth psycho vampire wannbe right?"   and "Big Pretzel."

My Interpretation: You have to not sweat the small stuff, and be happy that you're alive. When you do what you love, the right people will start to enjoy your talents too. And if they happen to be outside of your intended audience, all the better for it. Diversity is strength, helps keep you from becoming stagnant and boring.

The big in joke is set up from the first minute with the first big line given by the character of Dean, as he comments about the black and white case. As this episode is entirely shot in black and white. I think it answered one of the biggest questions a show like this has to face; which is how do you do a Hallowe'en episode when your show is about the paranormal?  Going to the "basics" with this, having it be the creature feature of the week, and a tribute to classic monsters in general was brilliant. Other than a few lines about Dean having been rescued from hell by angels, there isn't anything to anchor it to the rest of the season, making it the perfect stand alone episode.
This is also a great way to tear down the idea of "what you think you know isn't always the truth".  Which, ironically, would become a theme over the rest of season four and most of season five. New layers and sub-plots would start to be exposed over the course of the next year of the show.

This is another example too, of me having a situation in my life that was starting to eat at my confidence. I have noticed a drastic change in my core audience in the last few months, and realized that as I waver on where I fit, it's reflected in what I do.

Check back next week, and see what kind of situation I've gotten into and whom I asked for advice.

Posted by Domestic and Damned at 12:19 PM