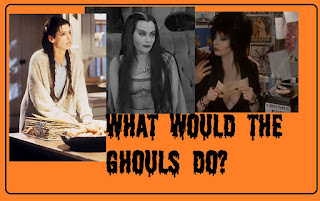 Situation: I've been told I'm too old to believe in things like the Easter Bunny, fairies and nice people. What should I do about it?

plot: While the Addams are spending Hallowe'en playing games, Wednesday is upset because the neighbour's told her there is no such thing as witches. To help easy her mind, Morticia decides to hold a seance to prove there are, by contacting their dead aunt. Only, when Ma-Ma finds out, she gets Lurch to pretend to be their dead aunt in order to help. This only makes things worse, as now everyone is waiting up for Aunt Singe's late night visit. When another neighbour comes knocking on their door in costume, they mistake her for their dead aunt.

Quotes: "First one to get an apple in his mouth wins the Hallowe'en prize."  -Morticia to both Gomez and Uncle Fester

"No no dear. They want little goodies." -Morticia explaining to Gomez how trick or treating works.

"I didn't scare anyone." -Wednesday in tears referring to her costume of a princess.

"What a terrible thing to tell a child." -Morticia after hearing what the neighbour said about witches not being real.

"I better go up to bed. If you can't believe in witches, what can you believe in?"  -Wednesday

"Uncle Fester, you do not make friends by whipping people." -Morticia

"Of course there are darling. Remember our great great great aunt Singe. She was burned at Salem." -Morticia to Gomez when he needs to be reassured witches are real.

"If we could only get one witch to sit down and explain thing to her."-Morticia

"Maybe their telephone numbers are unlisted?" -Morticia to Gomez and Fester when looking in the phone book under W.

"What right thinking witch would turn down a child on Hallowe'en?" - Morticia

"She maybe cinders but she's a lady." - Morticia not realizing it's actually Lurch answering her during the seance.

"But I'd rather have a spider." -Wednesday after Gomez gives her a pet horse.

"Whatever she told you about the holiday rush is quite true. She flew right out the window." -Morticia after mistaking the neighbour for their aunt.

Favourite Scene: When Lurch replies to Morticia after she rings the bell, and he's still talking in a high pitched voice, only Morticia doesn't seem to notice.

Using the Quotes: "No no they want little goodies."  and "Whatever she told you about the holiday rush is quite true. She flew right out the window."

My Interpretation: Everyone is entitled to their own belief.  There is a reason holidays are considered magickal. Centuries of people's excitement for them has added to the weight of the magick. And, there is nothing wrong with believing in the mystical.

This episode is a bit of a downer actually. What is suppose to be macabre and outrageous, doesn't feel like that now. It's one story that didn't really hold up over time.
The only real thing you can pull away from this episode, is that the neighbour had no business telling a little kid what they hold dear is not real. That was actually cruel.


Alrighty then. That's what I'm talking about (I feel better)

Come back next Monday and see what kind of situation I've gotten myself into and whom I turned to for advice.

Posted by Domestic and Damned at 5:25 PM