Yes, I know I said before the weekend that I would have this up on the weekend.  Well, I didn't and I'm not getting into why just... hey it's late okay deal.

We open with what seems to be a production meeting of sorts... this is the second month of the Open Fight Nights... with A.J. Styles, Bully Ray, Hardy, and Kurt Angle.
Bully Ray was taken out of the top four contenders spot for Roode's title.

Cut to- KnockOuts champ Gail Kim came to the ring.  She then called out ODB and EY.  So this became Kim/Rayne vs EY/ODB... I have to say, this has gone far enough.  Let Eric Young go back to X-Division or heavy weight singles matches please. Gail Kim got the win with a cheat.

Cut to- Robert Roode arriving at the building, then a quick cut to Hogan on the phone.

Cut to- RVD came to the ring and called out Gunner.  Raise your hands if you agree with me and that RVD needs to just go away and not come back. RVD won... damn it janet!

Cut to- Devon coming to the ring for his weekly TV Title match. He called out Garett.  Half way through the match, the Robbies came to the ring and caused the match to be thrown out.

Cut to- Hogan's office again and another cut to the top four contenders. Hardy was cut... thank god.

Cut to- a promo for Abyss, in black and white... sweet. Then Bully Ray came out to the ring and called out Abyss ... er right Abyss's brother.  You know wardrobe hid the tattoos with long sleeves, but make-up forgot to cover the scars on his forehead... 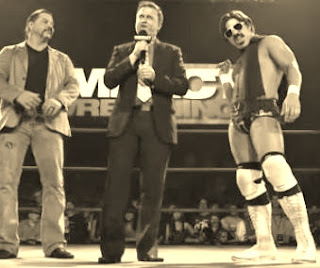 Cut to- Gut Check promo... Joey Ryan... okay, um can we say 1970's porn star wannabe?
He went up against Austin Aries... dude, how does that feel?   Aries won, as if there was any doubt.  To be honest, I personally thought that had this Joey Ryan guy gone up against someone a bit less then Aries, he might have looked impressive, but he got planted perfectly by Mr. Aries and rightly so.  Aries has single handedly kept the X-Division eventful in the last few months.  And yes I know, normally I use a sepia coloured for my screen captures but this new PC doesn't have that feature so b/w it is for now.

Cut to- Robert Roode came to the ring first for his match, then out came A.J. Styles and Kurt Angle.  Hogan still had to announce who would be fighting Roode in this main event.  I really wanted it to be Styles... and it was.  YES! finally Hogan did something right.  A.J. Styles went up against Robert Roode for the title.  If Roode wins, he not only keeps the title but will be officially the longest to hold this title in TNA. Styles previously held the title of holding the title the longest... follow... Roode did get the win and kept his title, as well as becoming the longest title holder to hold the TNA title.

If you're like me, then you started watching TNA for a reason, and for most of us that reason was because there were new and different guys in the ring. You loved the fact the X-Division and the tag team division were strong.  And if you're like me you're sitting here now going, when did it become like everything else we've seen?
Now, if you've been following my blogs at all in the last 7 years, you know I'm the type of girl who has something to say on everything, good, bad or otherwise.
Hence why I blog and part of why I started blogging about TNA to begin with.

So it seems that the show will be shifting time slots from 9pm to 8pm on Thursdays starting this week. And going live.
How do I think that will affect Impact?  It can't be good.  Everyone who watches much tv knows that when you start shuffling around a show it's near death and it's a desperation move to keep it alive.
This is one time I hope to be proved wrong, but I think it's a bad idea.

Posted by Domestic and Damned at 5:44 PM