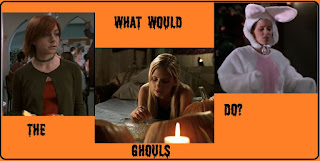 Situation: Things have been going pretty crappy for me lately, and I'm having some trust issues because of it.

plot: It's the gang's first Hallowe'en in college, and they decide to go to a party on campus. But instead of a nice relaxing night, they find themselves having to face a real haunted house and the demon of fear.

Quotes: "She didn't even touch her pumpkin. It's a freak with no face." -Willow to Oz and Xander

"This is an encouragement talk? I thought it was a share my pain." - Buffy to Willow

"I forgot to be hungry." -Buffy to Willow when seeing her recent ex-boyfriend

"Does stretching count?" - Buffy in reply to why she hasn't been joining in class.

"12 years old and I couldn't go trick or treating by myself. No, he wanted the candy, I was just the beard." -Buffy to her mom while remembering past Hallowe'ens with her dad.

"I dont' know, starting to see a pattern here. Open your heart to someone and he bails on you. Starting to think it's better to not let anyone in." - Buffy expressing her fear of being alone

"Certainly didn't help that my last boyfriend turned out to be a homicidal robot." -Buffy's mom on her own heartbreak.

"If Parker shows up, we'll just axe murder him. That's Halloweeny." -Willow on phone to Buffy

"Terrifying. If I were Abbott and Costello, this would be fairly traumatic." -Buffy on seeing the decorations at the haunted house party.

"That was not sanitary." -Willow after seeing a live spider

"Let's get to the party part of the party." -Buffy after arriving at the haunted house party.

"We need help, we need the only person who can make sense of this." -Buffy to Oz, Xander and Willow after they realize the party is hexed.

"I can handle the dark forces as good as anyone else." -Willow complaining to Oz

"There is no problem that can't be solved by chocolate." -Buffy to the whole group while eating candy.

"I was just thinking about the life of a pumpkin. Grow up in the sun, happily entwined with others then someone comes along cuts you open and rips your guts out."- Buffy pouting over her jack-o-lantern.

Favourite Scene: Near the end of the episode where Giles kicks down the door saving everyone with a chainsaw.

Quotes Using: "There is no problem that can't be solved by chocolate."   and  "I can handle the dark forces as good as anyone else."

My Interpretation: Things may seem bigger than they really are. When we find ourselves faced with something that at that moment, feels like the floor is caving in on us, panic can set in. We have to remind ourselves that if we just take a breath and relax a bit, we'll be able to work through it. Even when the answer isn't the one we were hoping for, we can face our worst insecurities.

In this episode, everyone is starting to feel the pull of their lives shifting around them. Xander being the only one not in college, is feeling left out and forgotten. Oz's fear is not being able to control his werewolf nature, and begins pulling away isolating himself on purpose in order to keep everyone safe. Willow, is feeling mocked and semi-powerless as she dives into her magick; unsure her friends will ever be fully willing to support her choices. Buffy has just come out of a bad relationship/one night stand, with her heart broken and romantic reality shattered. Anya is also finding herself feeling things she has ignored for too long, now that she's dating Xander.
Everyone's insecurity is manifested and magnified once they enter the haunted house party, after learning the demon of fear has been summons. Each under the illusion that they are separate and alone unable to connect with the rest of the group. When in reality, they are trapped in their own minds until they find themselves; literally back in the same room facing each other. It's only as a group that they have the courage to face their fears, and defeat the demon.
The inside joke being, the demon of fear is only a few centimeters high; giving notion to the term "nothing to fear but fear itself."

This episode also lays the ground work for much of the season, as each character has to find their own footing in what becomes a transitional stage in their lives.  Relationships for all the characters start, stop, sputter, break, begin again, and challenge them.
There is a scene midway in the episode where the group are walking to the party in their costumes, when they come across a group of military guys with masks. They just at that point, assume they are students in costume; when later in the season they learn something bigger is going on. It opens a floodgate of trust issues for everyone involved.

Alrighty, that's what I'm talking about (I feel better)

Come back next Monday, and see what kind of situation I've gotten myself into and whom I've asked for advice.

Posted by Domestic and Damned at 3:24 PM