In my purse, next to the mojo bag

Spudguns!  you've heard me say before how Raymond T. McNally and Forrest J. Ackerman are heroes of mine, and you've heard me talking about how I'm making a prop vampire hunter's kit for my collection. Right.

I didn't realize I'd end up needing to make props for a prop.  But that seems to be what's happened. Which is totally fine, cause everyone needs a hobby right?  And unless you've got a few thousand dollars just lazing around to give a professional prop maker; you've got to but the leg work in yourself for a ...prop. 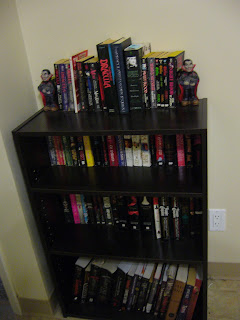 So what started off as a small "weekend project" of making a "center piece" for my vampire collection, (this photo shows half my vampire book collection. Not even a tip of the iceberg of my whole vampire collection which include movies, soundtracks, posters etc. I'm literally going to have a wall of bookcases just for my vamp stuff before I'm done this project) has turned into a bunch of little projects. And you know that old saying  measure twice cut once...yeah totally remember to do that.  See, there was my first mistake.  I had wanted a prop that would sit on the top of my one bookcase in a corner I was decorating in a theme. Ends up, the tool kit I bought was too large. It's going to need a table all it's own. But I'm determined to have a vampire hunter's kit damn it!
Which is what got me on the Supernatural marathon binge I've been on the last month.  Most of those vampire hunter's kits you see in movies or online are designed to have been a few hundred years old; and that originally was my plan. To make it look ancient and beat up. But, the case I found is aluminum, shinny and very modern. The more I thought about it, the less I wanted to destroy it. So, that led me to watching other vampire movies, that had "slayer kits" like how Buffy always uses just her purse/backpack, or the Frog brothers from Lost Boys, used water guns, or how Supernatural used the car as a portable hunter's kit.  See where I'm going with this.

So while I'm collecting bottles for "holy water" and salt and garlic bits, crosses, a mallet, and carving wooden stakes (which is a task in itself) I decided I wanted to add a hunter's journal/watcher's journal to the mix.
So I picked this up at the book store the other week. Which, if you're a fan of the show you know the "novel" is a tie-in to the main prop. I've just started reading it, and it ends up is more a prequel to the first few seasons then it really is a "guide" book.  And I have to say, for something that's listed as fiction, the novel is jammed with real items connected to hoodoo, shamanism, wicca, and the occult in general. It's actually got some better information on a few topics then some of the non-fiction witchcraft books I own. 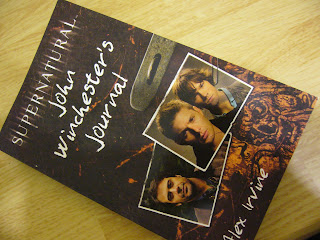 As I said, it's a novel more so then a season by season guide book. (I just found out there is another picture book of the seasons monsters which is what I should have gotten as well) with a scattering of "pictures" to tie the whole thing together.
But it's what I'm basing my one prop on. Now, my ability to draw is better than stick figures, it's not on the level of graphic novels or anything, so I doubt I'll have many of those in the little book. I do plan to however, have snapshots of some of the other "props" so the hunter's journal ends up looking more like a scrapbook/diary then anything else.

Still with me...spiffy. I know long post today, hope you've had a coffee.

So here's a semi-half arse thought out plan. I'm going to create some "hunter's adventures" for the prop hunter's journal-that is for the prop vampire hunter's kit.  Follow. And I'm going to post some of them here. Like a bunch of chapters or something.

Told you it was only semi-thought out.

Posted by Domestic and Damned at 11:55 AM